Nail polish for men – My experience

Men painting their nails is not something new, I mean look all the rockers out there, through the years, all these icons from the 80’s and so on… But is it still a big deal in 2017? Is it easy to use nail polish when you are a man in today’s world? Do we care about that?

All these questions were flying in my head, together with Marc Jabobs obsession for it in 2016 and some people here and there trying out, that I felt intrigued and decided to test this “no trend”. Honestly, although I find it really dope and I really appreciate guys that are bold enough or just want to paint their nails, I never really thought about doing it. It was just not my call, even if I love some rock and roll style. It was a great challenge for me, and here I am sharing with you how I felt, how it affects your style, how people react to it and so on… Come with me on this journey!

Day 1: So we painted my nails on a Friday morning, and the idea was to stay for 5 days, so I could really live it and have an idea of the nail-polish life style. Of course, my immediate thought was to paint it black, basic and rock! But people around me told me to be bolder, as black is so basic and I agreed with them and I decided to go electric blue (as blue is my all time fav color), but it’s no ordinary electric blue, but a glittering one!

The First sensation was bizarre. I was so conscious about them and I didn’t want to ruin them, so I was really careful and my had gesture were all affected by it for some hours (I feel you girls a bit now). After some hours you forget it and dam it ruins really fast.

But then, it comes the style part. I really felt it influences the garment choice, because depending on the color it already calls the attention to it, so it’s really up to how much attention you feel like having. I naturally opted for rock oriented clothes but I felt like keeping it really simple.

Not sure if it was my conscientious state of mind, but I felt people really looking at it and trying not to comment. I felt quite exposed. Especially elder people, you could see they were a bit shocked. At the end of the day, in a store, I was surprised by a guy really enthusiastic asking me why blue instead of green!

But other friends reacted in mix ways, with WTF moments and laughs, but soon nobody notices it anymore, including me.

Day 2: Woke up the other day totally oblivious of my nails and for a moment I thought I was dreaming when I saw them blue. On Instagram, a lot of messages encouraging, cheering, and some other being a bit sarcastic.

To go out, again I opted for a rock style, but this time with my Cobain shades that have this bold and feminine touch, so it was really bringing attention, but I was feeling good with it and enjoying my look. I almost forgot them actually, but in some places, you could tell people were shocked or intrigued by it. Of course, I met a lot of friends this day, but no big.

Day 3: Sunday at home, totally used to them, but really obsessed about touching and feeling the texture of the dam nail-polish. Problem is that Sunday is the day I cook, wash, organize and so on… And they really suffered from all the activities and started looking really damaged and punk (to have a rock reference). 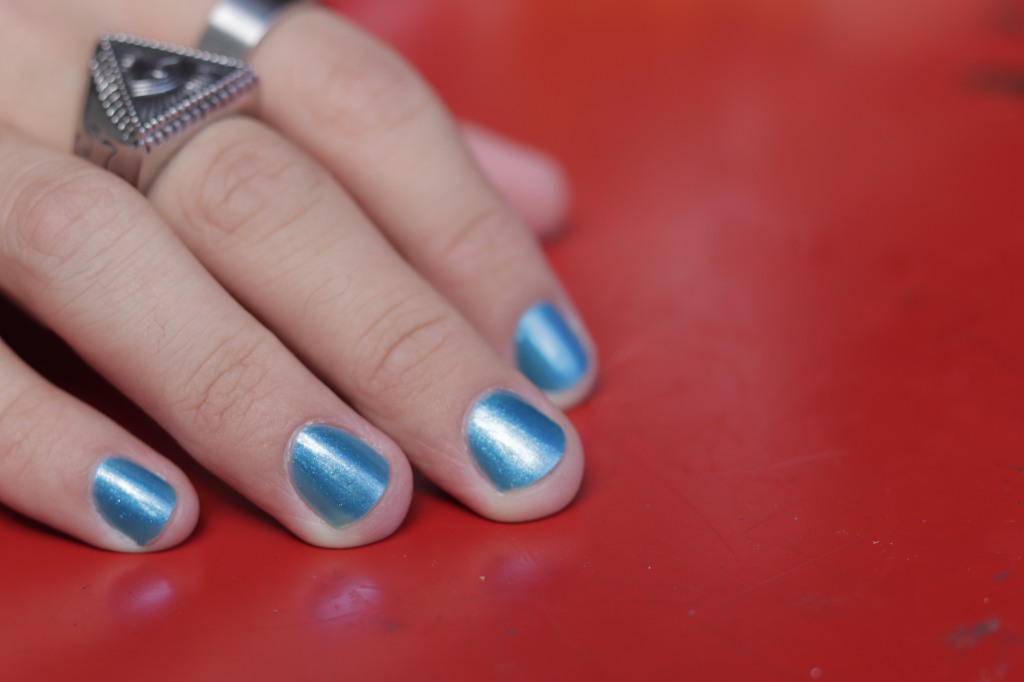 Day 4: Fourth day, I was off from work and decided to walk around, lost on the streets and I went to Geneva. Look-wise I opted for basic jeans and white shirt, influenced by the hot weather and the blue nails. But I was feeling really good. People look a lot at them, definitely, but you stop caring that much. At the end of the day they were really damaged, so after the gym and all the looks I got there, I decided to take them out, one day in advance. Much harder than I thought, it comes off with quite some rubbing… And I was a bit sad, as I got used to them. Probably will repeat the dose. My close ones were already used to it and took them a while to notice I had taken them off. 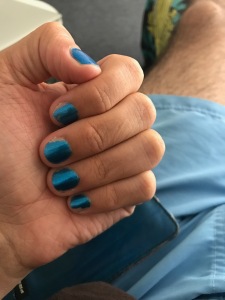 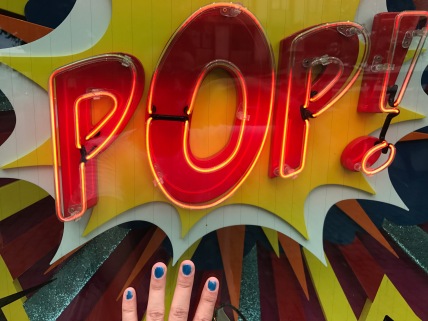 Conclusion: Is it hard to be a man with nail-polish these days? Yes, it is. People still judge you and care about your life. Of course, it depends on you, how you feel about people’s opinion and about your own style. I think it was a really interesting experience. I discovered through friends and messages that it is not easy to have your nails painted not even in big cities like London – which I thought it would be much more accepted. It all depends on where you are and the people you’re dealing with, but no matter where people will still look and talk about it.

Another interesting thing was the reaction of some friends and their concept of feminine and masculine. One friend was really judgy towards me saying it was super feminine. I truly expected more, especially from my gay friends… Who’s to say what is feminine or masculine, these concepts are so engraved in us by a male oriented society, and it is a bit sad to see/hear that kind of reactions.

Anyways, I would do it again with no problem, another day, another color. It is a great style alternative and I believe now that it’s also a great social exercise. People should care more about important things. I really appreciate bold people that do what like and feel comfortable with it and I really expected to feel less prisoner of the social patterns and the concept of feminine and masculine. If you feel good about it, use it with attitude and stand out from the crowd, this is the sum of style for me. 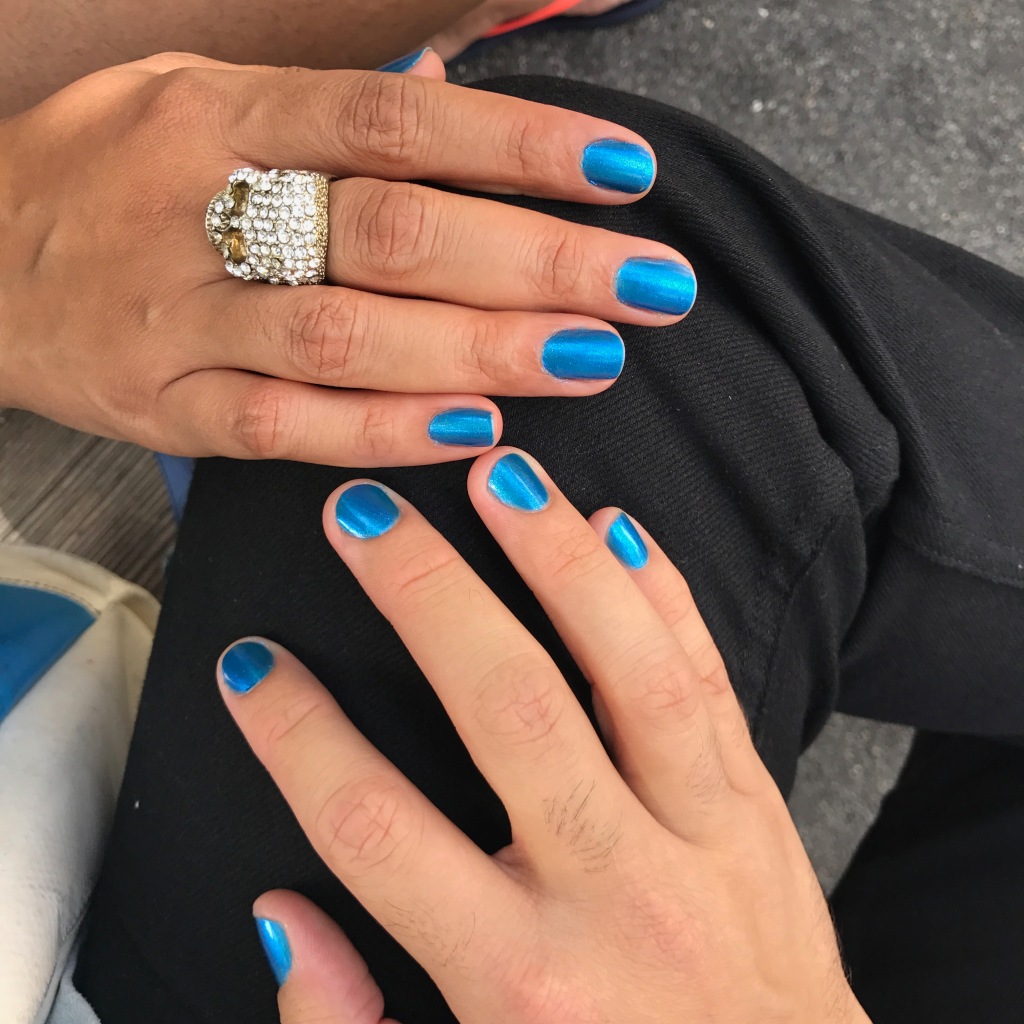 An insomniac guy sharing his adventures in life & in fashion. Currently based in Canada & Switzerland.

One thought on “Nail polish for men – My experience ”